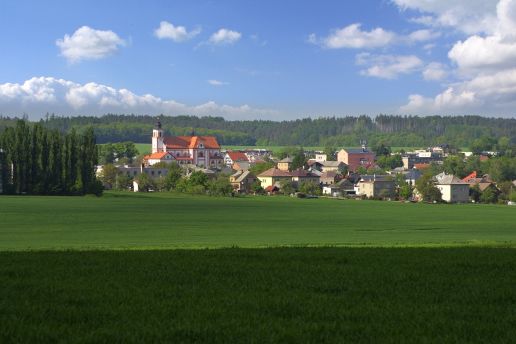 The old Silesian village BOLATICE is situated in the southern part of the Hlučín hilly country, nearly six kilometres to north-east of town Kravaře ve Slezsku. It is also very close to the Polish border. The village is surrounded by hills of height more than 271 metres above the sea level.

On 31st December 1998 there were 4168 residents in the village, 1038 houses, 9 residential buildings, a shopping center, a post, two banks, a castle, a church, a complex of buildings for school and kindergarden, a cultural house, a cinema, a medical center, two fire-stations, four chapels, a swimming pool and a sauna, a factory Lanex a.s. that produces bags and ropes and has 600 employees. There is also an agricultural co-operation that has 627 hectares of land, 16 private farmers, a bakery, eight restaurants and pubs, 15 private shops and several businesses in transport and car-repairs, a cabinet-maker’s, a hair dresser’s, an upholsterer’s, a black-smith’s trade, a plumber’s, etc.

re are 57 percent of productive, 26 percent of pre-productive and 17 percent of non-productive age. A total lenght of the roads is 16.5 km, of the pavements is 9.3 km.The size of the public areas is 7600 square metres. The village area plans were approved on 17 th June 1996. Bolatice take part in the village restoration program. All the houses and flats get a bulletin that is published every two months. “An association for the village restoration” has been working for two years now. It helps the municipal administrators. The members are municipal administrators, local businessmen and other citisens.

The aim of the association is drawing and realization of the village restoration program that should help the economic, social and town-planning development of the village.

The association managed to help with the realization of some points of the restoration program in past two years. They are the road construction, the reconstruction of the castle, church steps and dikes, trees and flower planting, a dump recultivation in Borová, the fire-station roof reconstruction in Borová, a new bulletin lay-out, an increase of the cultural actions, etc.

There are many other things that can be improved in our village. So we would appreciate any new idea as well as new members in our association for the village restoration.