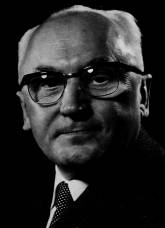 August Scholtis was born on 7th August 1901 in Bolatice. The first name August was given to him because of the month of his birth. August’s father, Fritz Scholtis, was a cottage’s son, he owned a bakery, and a little farm and he was very interested in keeping bees. He also made music. His mother Valeska, née Dudová was a peasant daughter, pious, she worked very hard. She died when she was 42.

August Scholtis spent his childhood more with his nice friendly granddad Tom. He learnt from him a lot about folklore and history. He knew his other grandparents only a little. Scholtis was brought up in a strict Prussian and catholic way. His family used to pray on their knees every day in the morning as well as in the evening.

From 1907 August Scholtis attended the school in Bolatice, where his uncle was a teacher. A young teacher Karel Schrodok from Nisa had been teaching in Bolatice from 1910 to 1914. His teaching methods were very successful that his pupils did not want to go home. Even parents attended evening courses. Schrodok introduced Josef Von Eichendorff to his pupils. He even established a library in the village at his expenses.

After having finished school, Scholtis went to the bricklayers. He was not satisfied there and in three months he began working in a near village Chuchelná as an assistant clerk. His uncle mediated this job.

In 1920 Bolatice together with other 37 villages from Raciborz district – southern part of Upper Silesia – were allocated to newly founded Czechoslovakia. This area was named Hlučín Lands. Scholtis had opted for Germany and that is why he had to leave his home two years later.

In the next seven years he got through as a clerk in industry and in Silesian offices.

He had worked for Schrodok’s newspaper “Black Eagle” during the plebiscite already. As a journalist he had started working from 1929. He tried to be a writer two years before, but with a little success.

In 1927 he co-operated with “Silesian Monthly” and with “Silesian Report”. He won a competition with his story “Nachruf” (Remembrance). He was motivated by this success to become a writer.

After a short visit in Prague he decided to try his luck in Berlin.

August Scholtis died on 26th April 1969, he had a heart attack. He was found dead in his flat in Berlin, where he left a manuscript of the novel “Schlo Fürstenkron”. It was published after his death.

August Scholtis was a passionate letter-writer. He left about 5 000 letters.
Joachim Scholz, living in the U.S.A., compiled this correspondence and published it in two volumes, with about 600 letters – “August Scholtis – letters” (1991 – 1992).

On 7th October 2000 a tablet by the portal of our chateau was solemnly unveiled, gusts from Germany, Austria and Poland were present.

He was one of the most important inhabitants. He was a writer of Silesian and Czech baroque.

He was born in Frýdek na Moravě in 1683. He studied a grammar school in Brno and Olomouc. He entered a Cistercian monastery on Velehrad when he was eighteen. He entered holy orders on 19th May 1657. He was sent as a provost and a bailiff to Bolatice in 1674. There were two reasons for this. He was ment to uplift the economy in the area that was still struggling after the Thirty Years’ War. The second reason was to uplift the religion and moral standards of the local people. After eighteen years Hirschmentzel left Bolatice and went back to the Velehrad monastery in 1692. He wrote forty-two books during his life. They were mainly in German and in Latin. Only two of them were printed. Between his the most important works belong essays “Hádání sedláka s měšt’anem o přednostech stavu”, a Latin study about Czech and Polish history “Čtyřdílná historie království českého, markrabství moravského a velehradského kláštera” and a collection of humorous stories in a book “Feriae Chritstiano Baccchanales”.